Being a shepherd on the arid hillsides of the middle east is not a romantic occupation. Anyone who has visited that part of the world will be familiar with the sight of young men, standing in the middle of nowhere, with a long stick slung across their shoulders, surrounded by sheep. It is a boring job which involves long hours outside in the heat of the day. And, being a task that requires little skill or agility, it generally falls to teenagers or old men.
This situation was no different in the ancient world. When Jesus spoke of himself being a 'good shepherd’ he was playing on people’s prejudices against those who worked on the lowest rung of society’s ladder. Western art presents the image of Jesus as the Good Shepherd as a romantic icon, but that is not at all how the idea resonated when Jesus first said it. John’s gospel tells us that the immediate reaction of Jesus' audience was to exclaim, ‘He's out of his mind!’
By likening himself to a shepherd, Jesus was expressing astounding humility, presenting God's care and provision as an act of lowly service. By casting himself as a good shepherd, Jesus was stressing that he was proud to fulfil such a role, and do it with unprecedented care. The nearest equivalent in our modern world would be a toilet attendant who doesn’t just clean the toilets but who polishes them as well.
This is our God! God gladly takes on the undesirable role of looking after the human race, and does so with a wholehearted dedication and affection which borders on absurdity. God is proud to be a shepherd, and a good one at that.
As you go about your business, be sure to notice the low paid, low status workers - those who do the tasks no-one else wants to do. Pause to appreciate them. These are Jesus’ sort of people. 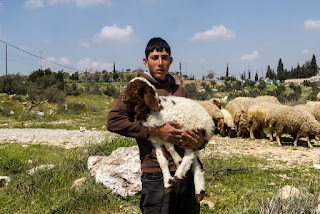